Kenickie is a student at Rydell High, Danny Zuko's best friend and Second-in-Command of the T-Birds.

Kenickie appears the whole movie sporting the typical Greaser attire: Blue jeans with a black belt, a bluish-white T-Shirt, black engineer boots, and his black leather jacket with the T-Birds logo on the back. He also wears a gold necklace around his neck. He has dark blond hair done in a pompadour, and pale blue eyes. 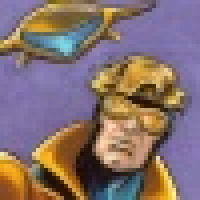